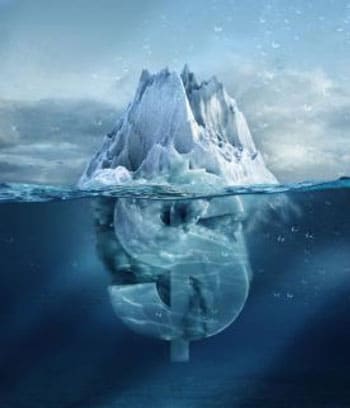 An estate freeze is a way to cap (or freeze) the current value of an individual’s shares in a private company, while preventing further growth in the capital gains tax liability that will result on the disposition of those shares (either while the shareholder is alive or upon death). The result is that that the individual has frozen (or crystallized) their tax liability at that point in time. Generally, any future growth in share value (as well as any resulting capital gains liability) will accrue to newly issued shares held by the next generation. 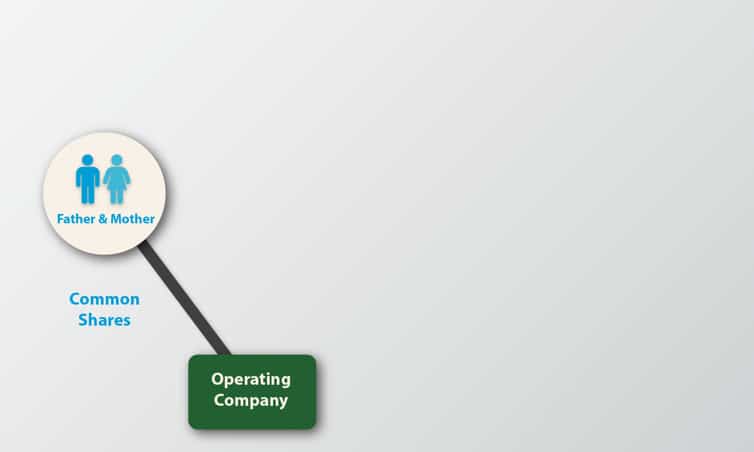 Year 1: This is the typical ownership structure in a family business before the estate freeze, with the parents owning common shares in an Operating Company. 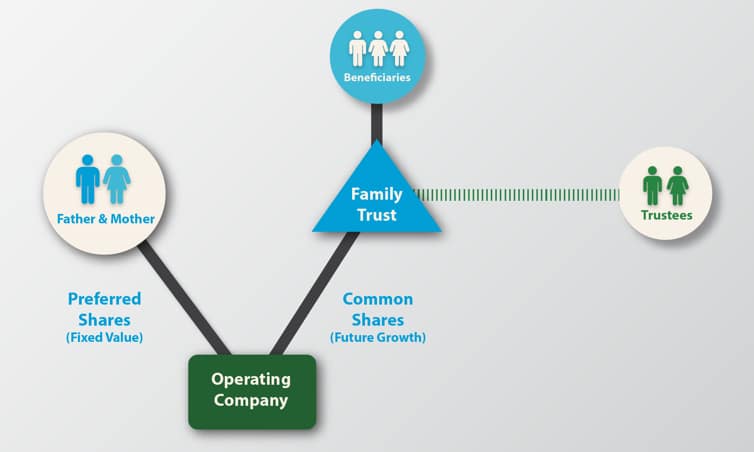 Year 1: The initial step is to “freeze” the value of shares owned by the parents. This is accomplished by exchanging their common shares for preference shares with a fixed redemption and retraction value equal to the fair market value of the common shares. This freezes both the value of the shares as well as the capital gains tax liability due on the death of the survivor. To fund this tax, it is advisable for the parents to obtain a joint second-to-die life insurance policy. A Family Trust is then created with new common shares being issued to it. The beneficiaries of the Family Trust are typically the children of the parents) in some cases the parents will also be beneficiaries). The Trustees, which usually includes the parents, control the Trust and any voting rights attached to the common shares. 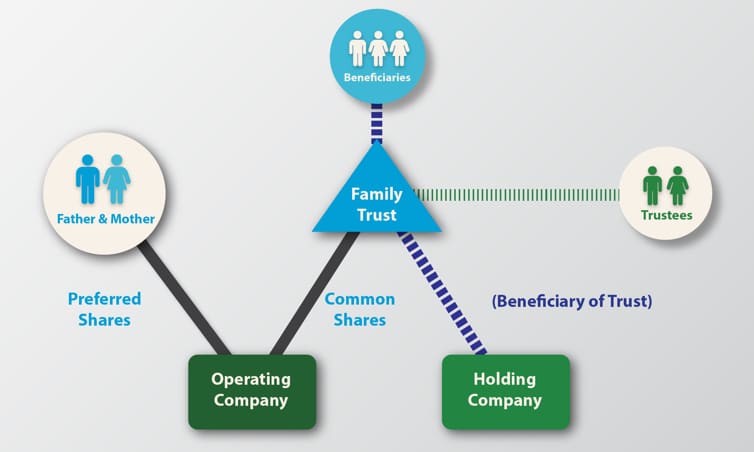 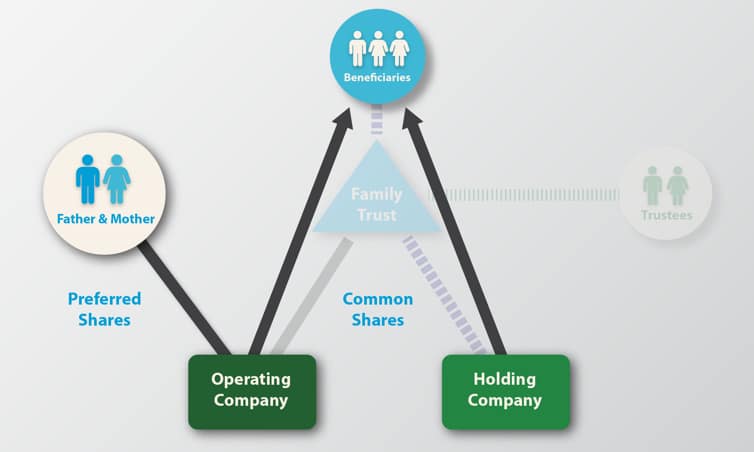 Year 21: As discussed in the Guide, the "21-Year Rule" requires that 21 years after the Trust is established (and every following 21 years), the assets of the Trust will be deemed to be disposed of, triggering taxes on capital gains. To avoid this result, the Trust assets are normally distributed on a rollover basis (i.e. tax free) to one or more of the Canadian beneficiaries, at the discretion of the Trustee. 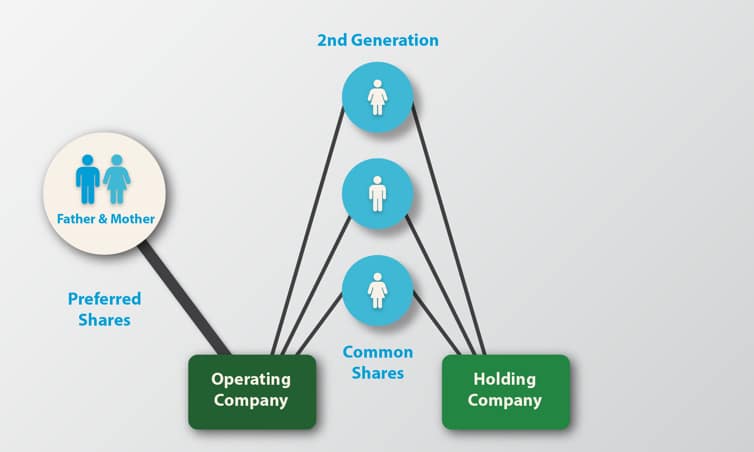 Years 21+: Assuming the assets of the trust have been distributed to avoid the 21-year rule, the beneficiaries now own the common shares of the Operating and Holding Company. They are also liable for the capital gains tax associated with the growth in the value of these shares, either when they sell the shares or when they die, due to the deemed disposition rules. It is a good idea to obtain life insurance on each of the beneficiaries early on to fund their eventual estate tax liability. 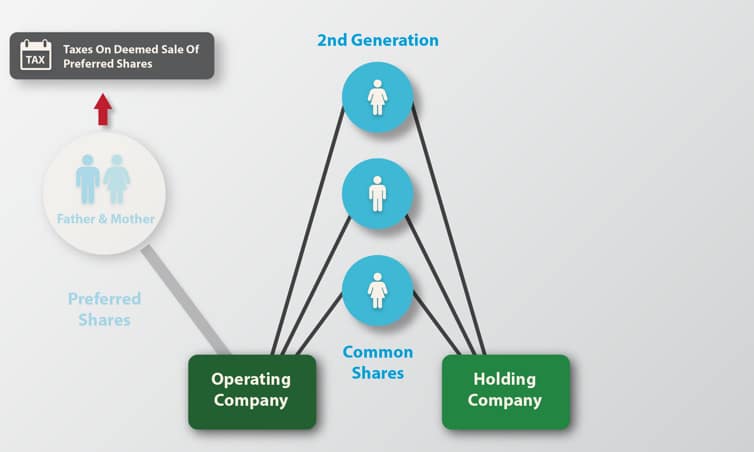 On the second to die of the parents, a capital gains tax liability is triggered on the preference shares due to the deemed disposition of those shares on death. If life insurance is in place, it can fund this tax liability, preserving more of the estate for the beneficiaries. Life insurance also minimizes potential cash flow problems for the family business, as it won’t have to immediately redeem the preference shares to provide funds to pay the capital gains tax. 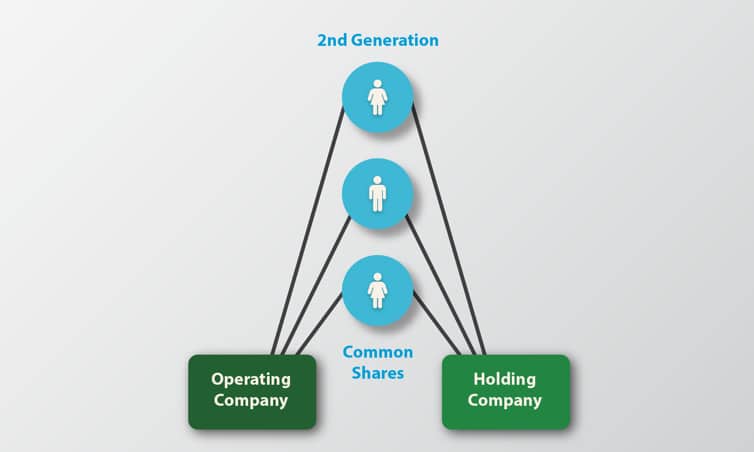 The children now own all the shares in the company and their shares will be subject to tax on their death due to deemed disposition rules. At this stage, it may be appropriate for the children to undertake a share reorganization and possibly enter into a new estate freeze.

The common shares that are to be frozen in value will need to be appraised prior to their conversion into the fixed value preferred shares. Although a formal valuation is not technically required, a valuation expert (such as a Certified Business Valuator) is typically retained to determine the value of the corporation and various classes of shares. This will reduce the possibility that the Canada Revenue Agency (CRA) dispute the value of the fixed value preference shares in the future. Where a reasonable attempt has been made to value the shares, the CRA will respect a price adjustment clause included as part of the freeze. This can help to avoid any adverse tax implications should the CRA successfully dispute the value of the preferred shares in the future.

The newly issued preference shares will have an inherent capital gain equal to the excess of the fair market value of the shares at the time of the freeze and the adjusted cost base of the shares (which may have been increased by utilizing the shareholder’s lifetime capital gains exemption). If on death, the business owner transfers the shares directly to his or her surviving spouse or through a spousal trust in a Will, the preferred shares will be transferred to the survivor on a rollover basis and no tax will be triggered. The inherent capital gains tax liability associated with the frozen preferred shares can therefore be deferred until the second to die of owner and spouse.

The freeze transaction also creates certainty as to the capital gains tax liability associated with the preferred shares. If the disposition of these shares takes place on death, this tax liability can be funded in one of three ways; by using cash or selling assets in the estate or company, by borrowing from a bank, or through life insurance on the life of the business owner or jointly on the owner and spouse. The preferred shares may also be gradually redeemed during the lifetime of the owner and spouse. However, this approach triggers dividend tax treatment, which currently results in an overall tax liability that is significantly higher than capital gains tax rates. There is also the potential for the expanded tax on split income rules to apply in certain situations, which ensure the dividends are taxed at the highest marginal tax rate. The TOSI rules are explained in more detail here.

A trust is treated as a separate taxpayer and will be taxable on any income or capital gains that it retains at the top marginal tax rate. However, income distributed to beneficiaries will typically be taxable to the beneficiaries at their marginal tax rate, and certain income such as taxable dividends and capital gains will retain their tax character. Subject to the possible application of the tax on split income (TOSI) rules, this will permit income splitting and possible multiplication of the lifetime capital gains exemption.

However, if the trust is not a life interest trust, the trust will be deemed to have disposed of its capital property every 21 years and any gains will be taxed to the trust at the top marginal tax rate. This can be avoided by distributing trust assets (i.e. the common shares) to the beneficiaries of the trust prior to the end of the 21-year period. Provided such beneficiaries are residents of Canada, the transfer of trust property can take place on a rollover basis.

In the next sections you will learn about:

Recap – Objectives of an Estate Freeze

The Benefits of a Will
Power of Attorney and Living Wills